From Wiki.CoreyBlair.US
Jump to navigation Jump to search

The Impulse 26 is a mono-hull performance racing sailboat circa mid 1980s. Designed by Bill Cook the Impulse 26 has a seven eighths fractional rig that features a mast forward design resulting in a dwarfed "J" measurement. This translates to an extended space in the cockpit and an unusually large mainsail. The boat is known to be extremely fast upwind in light winds (1-8mph) with a calm sea state. The boat is very stable in moderate to heavy wind states; However, it does not excel in these conditions like other boats of it's era.

The Impulse 26 is known to have two different variations on design. There is some confusion as the variations were a slow progression throughout three different manufacturers.

The MK-I deck layout featured a lift off hatch at the companionway that could be stowed. The deck itself is foam cored. The cockpit also has blunt edges to the interior bench. The main winches are precariously located aft near the main traveler. The tortured transom also has a slightly smaller step. The MK-I is built noticably light and has been know to oil can under high rig loads. This probably adds to it's already sub par performance in moderate and above conditions. Though in mild conditions being built lean probably adds slightly to it's already stellar performance. 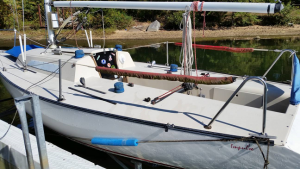 The MK-II deck layout features a sliding companionway hatch. The deck itself is balsa cored. The winches in the cockpit are centered between the main traveler and cabin making for more centered leverage for trimming. The edges are also rounded off making crew work more ergonomic. The tortured transom has a wider step. The MK-II also features a beefier structural build with noticeably larger stringers and hull thickness. 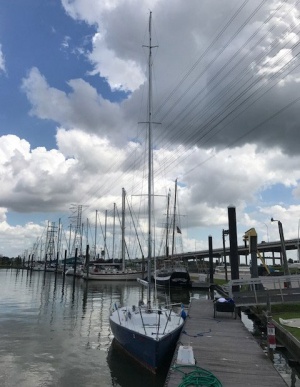 The Impulse 26 was produced with several different rig configurations according to multiple owners that have compared different builds in person. The most common configuration produced was a ⅞ fractional rig with a single set of spreaders and a permanent backstay connected to the unsupported mast tip. A handful of the earlier builds were produced with the ⅞ fractional rig, double spreaders, a supported mast tip, and running backstays. This configuration was reportedly overly complicated and weak, to the point that mast breakage was common.[1]

The Over-sized ⅞ fractional rig on an Impulse 26 equates to a rather large mainsail and boom. The Impulse 26 mainsail is generally loose footed with two full length battens at the top and 3 partial battens on the bottom ⅔ of the sail. Thus the boat was designed with many controls to handle the large amount of power it can produce in a fresh breeze.
Those controls are as follows

Generally the Impulse26 is commonly sailed in light air conditions with a 145-150 genoa. Although some owners have opted for a 125-135 number two, with a flatly cut main, it can still be sailed in an overpowered configuration fairly easily. Once the conditions permit, a 100 jib will keep the boat pointing and manageable.

The spinnaker on a ⅞ fractional rig can leave the boat underwhelming downwind in mild conditions. The helmsmen must be diligent of keeping the main sail trimmed correctly as it is still a substantial source of power. Having a smaller spinnaker and a large main is beneficial in fresh conditions as the spinnaker can be buried easily and the boat rapidly de-powers.